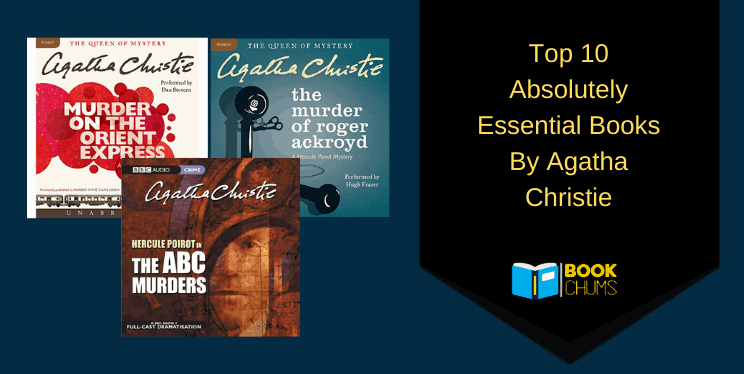 Agatha Christie is known as the queen of mystery for a reason. The novelist has always amazed the reader with her amazing talent and her books that will keep you hooked until the end. She is not only a famous and renowned writer in mystery but she is also the best selling author of all time.

You would be amazed to know that the author has sold 2 billion copies of books in her entire career which is a big achievement for any novelist. Agatha Christie has a large fan base and people still follow her books long after her death.

Getting so much fame in the industry is a dream for a lot of writers. And Agatha Christie was able to achieve it because of her extraordinary talent. The writer truly has a gift of writing and there is no denying in that. So if you have not read any of her novels till yet, then you should do it immediately. Because you don’t know what you are missing on.

The writer has written a total of 60 novels and 14 short stories in her career. And selecting the one to start with could be a daunting task. So here we have brought you the list of the best Agatha Christie books to read. These novels are selected on the bases of their popularity among the readers and their experience. Have a look below:

1. Murder on the Orient Express

Murder on the Orient Express is one of the most popular books of the novelist. The theatre adaption of the book is done by Kenneth Branagh and the movie was released with the name Tomorrow. The book is a detective novel with a Belgian detective as a central character.

Hercule Poirot, the detective who is traveling in the Orient Express gets engaged with solving a murder. The murder that happened at the same train he is traveling with.

Agatha Christie has written many books while taking the Belgian detective, Hercules Poirot as a central character. Murder on the Orient was published on 1 January 1934.

2. The Murder of Roger Ackroyd

The Murder of Roger Ackroyd is considered as the greatest plot twist in the history of mysteries. Agatha Christie has beautifully written this novel with hair raising turn of events that will keep you hooked with the book till the end.

The central character of the novel is the man named Roger Ackroyd, the man who knew too much. The woman whom he loved has taken her own life by drug overdose because someone was blackmailing her. She has killed her own husband after poisoning him and Roger knew very well who was blackmailing her and why.

The Murder of Roger Ackroyd is a Hercule Poirot story with the greatest of a plot twist. The novel was originally published in the year 1926.

The A.B.C. Murders written by the British Novelist Agatha Christie was published in the year 1936. The book is about a series of killings that are named the A.B.C murders hence the name. The Hercules Poirot novel is again a detective fiction.

The A.B.C. murders feature Arthur Hastings and Chief Inspector Japp. The screen adaption of the same is done by BBC network in the form of a series of the same name since 2018. The novel tackles the mentality of the serial killer and his intention behind it.

The thrilling crime fiction novel will definitely live up to your expectations if you love reading some adrenaline rushing and hair-raising books.

4. Death on the Nile

You must be wondering by now that do all the novels of Agatha Christie revolves around a murder. Well, yeah most of them do. The author is famous for detective novels, mystery books, crime fiction, psychological thrillers and all that. And to bring some spiciness in the story a murder is must according to the British novel.

Death on the Nile was first published in the year 1937. The movie with the same name is going to hit the theatres this year. The upcoming thriller movie is based on the novel of Agatha Christie in which Hercules Poirot, while his vacation on the Nile unravels, solves the case of a young heiress who has been recently murdered.

Curtain was published a year before her death, the time when her writing suffered a serious decline. As the name suggests, Curtain is the last case of Hercules Poirot, the greatest creation of Agatha Christie who solved the most cases in her books. The Belgian detective is one of the strongest works of Agatha Christie and with Curtain he meets his final case.

The plot twist in the novel will catch the regular readers of Agatha Christie’s novels off guard. If you have been following the works of the novelist especially the one with Hercules Poirot then this novel has stored the biggest shock for you.

6. And Then There Were None

Next on the list, we have And Then There Were None. The novel is a must-read for every mystery-loving person. The idea behind this novel is very chilling as well as interesting. Eight people are invited to an isolated island. The people are trapped there and get killed one by one because they have committed some serious crimes earlier which they have gotten away with.

And Then There Were None is the most famous novel by Agatha Christie of all time and you should definitely give it a try if you are interested in reading mystery and thriller.

7. The Murder at the Vicarage

And here we come with another murder mystery written by Agatha Christie. The Murder at the Vicarage is one of the best works of Agatha Christie which of course is crime fiction. The story of the novel revolves around Miss Marple, the other famous detective from the novels of the writer.

Everyone in the town wanted Miss Marple to be dead and one day she gets murdered. Now the novel deals with unraveling the details of her murder and who killed her. The character of Miss Marple is of the old lady who has keen intellect with the help of which she has done some exceptional works in her career.

8. The Mysterious Affair at Styles

The Mysterious Affair at Styles deals with the murder of a wealthy woman who has been poisoned. It follows the time period during World War I. To assist the detective to solve the case, Hercules Poirot is called. Poirot who is the refugee from Belgium reveals some shocking details concerned with the murder that will leave you stunned.

Peril at the End House is another mystery novel featuring Hercules Poirot. The novel was first published in the year 1932. The story revolves around the life of Nick Buckely which may be an unusual name for a woman but so is her life. Hercules Poirot on his vacation at the Cornish Riveria.

He is alarmed by the lady’s accidental brushes with death. After realizing that she needs his help Hercules Poirot is all ready to solve the mystery. The novel may seem too obvious but a few pages, before the big reveal, you will assume that it is nearly impossible to find the truth and that’s when you get hit with the biggest shock.

The crime fiction is a fascinating story of desperation, greed, and guilt. It follows the life of Micheal Rogers, the man who has his eyes on Gipsy’s acre and dreams of finding a girl and living happily ever after in that beautiful upland site with truly beautiful views from the sea.

The novel takes a huge turn of events and Micheal finally learns about the true meaning of the old English saying that reads, ‘In my end is my beginning’.

The above-mentioned novels by Agatha Christie are one of the best novels ever written by the novelist. The British writer has not only become famous for her work in mysteries but she is also celebrated to be one of the bestselling novelists. Her work has always fascinated the readers and it is nearly impossible to not mention Agatha Christie whenever you are talking about mystery thriller books.

These were the top 10 novels written by the novelist if you read any one of them please let us know in the comment section about your experience of the book. Also, we would love to receive your feedback about this book as well.