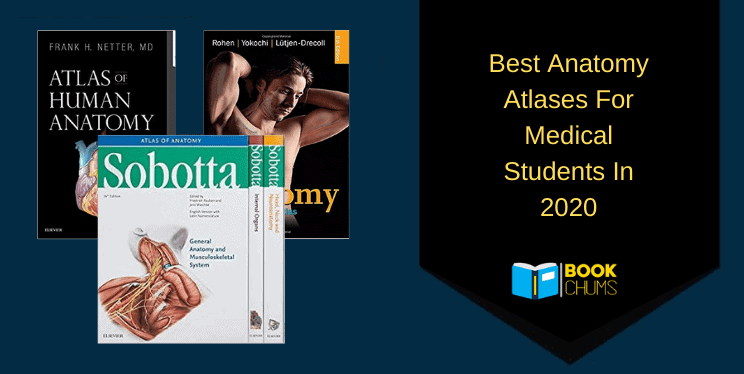 As interesting as Human Anatomy is, it is equally difficult to understand the subject with all the complicated terminologies and lengthy descriptions. But for students who are willing to pursue the subject despite all the difficulties, there are numerous books in the market that will help you get the grip on the matter.

The market is full of books related to Human Anatomy but since Human Anatomy is such a vast subject, just a textbook is not enough and that is why Anatomy Atlases are formed. They are known for giving the students detailed diagrams that facilitate learning in students. You will find numerous anatomy atlas in the market for studying.

Now the real question is which one of them is good for you and will actually serve the purpose? Well, we are here to end this dilemma of yours. This article features one of the best Anatomy Atlas for medical students that are selected under various parameters concerned with facilitating the learning process for students.

The below-mentioned books are not only the best selling books of Anatomy Atlas but they are also known for providing the students with satisfying results and are very popular among the buyers. We have also revised the list in the current year.

Rohen’s Anatomy: A Photographic Atlas is written by Johannes W. Rohen MD, Chihiro Yokochi MD, Elke Lutjen Drecoll Md, and the eighth edition of the book were published in the year 2015. One of the prime reasons to prefer this book is the fact that it has real-life photographs instead of artificial drawings. This way the authors tried to bring the reality of the human anatomy into their books by not using some colorful illustrations.

The life-like images in the Rohen’s Anatomy bring life to the subject, and the effect is so lively that you will actually feel the photographs with your touch. The interesting approach by the authors in Rohen’s Anatomy has made this book one of the best selling books among the students.

The book not only makes the students understand the anatomy of the human body thoroughly but also uses a fun way while doing so. The parts are discussed in a wide detail in the book and it also emphasizes the application of the concepts.

Sobotta Atlas Of Human Anatomy is written by Friedrich Paulsen and Jens Waschke. The current edition of the book, that is the 15th one was published in the year 2013. The book is highly recommended by some medical professionals as it deals with every aspect concerned with human anatomy in an effective manner.

You will find this Anatomy Atlas, one of the best in the market. The book shows us the anatomy of the human body through different angles and all the images used in the book are pretty clear and detailed. It emphasizes on the expectations of the students while learning the human anatomy and therefore has all the elements required in the process of learning.

Every image in the atlas shows us the body structures in a detailed manner and it also established the correlation among the features of the image to give you a better understanding of the subject. You will learn most of the stuff by just glancing the pages with focus.

The current edition of the book, that is the 15th edition comes in three volumes, namely, Volume 1: General Anatomy and Musculoskeletal System, Volume 2: Internal Organs, Volume 3: Head Neck and Neuroanatomy.

Netter’s Atlas of Human Anatomy is written by Frank H. Netter MD and the 7th Edition of the book was published in the year 2018. The book is wildly famous among the medical students and professionals and is considered as one of the best selling books that we have. The popularity of this book is more than any other book on this list.

Netter’s Atlas of Human Anatomy uses an elaborative approach to show bright and descriptive images. The colorful pictures make it really easier for us to memorize the parts of the human body and their medical terms. Though the pictures seem artificial but it serves the purpose of using an atlas.

The images presented in the book uses various colors in distinguishing the features from one another. It will also create a mental picture in your head of all the body parts and features and will facilitate learning for you. Though there is not a lot of text available in the book that gives you a description of the illustrations.

4. Clemente’s Anatomy: A Regional Atlas Of The Human Body

The author of Clemente’s Anatomy: A Regional Atlas of the Human Body is Carmen D. Clemente. The sixth edition of the book which is also referred to as the North American Edition was released in the year 2010. The Anatomy atlas is pretty organized and provides detailed images using distinguishing colors and tables.

The book is the trimmed version of Sabotta’s Atlas of Human Anatomy. Clemente’s Anatomy: A Regional Atlas of the Human Body has over a thousand images that are very detailed and illustrated with bright colors so that the reader will be able to memorize it quickly.

The latest version of the book also features numerous CT scans, X-rays, sonograms, etc. to give a full understanding of the subject to the students. This atlas is highly recommended for beginners and even people having no prior knowledge of human anatomy can perfectly understand it.

The Gilroy’s Atlas of Anatomy is authored by numerous writers, namely, Anne M. Gilroy, Brian R MacPherson, Micheal Schuenka, Erik Schulte, Udo Schumacher. The third edition of the book was published in the year 2016. The unique feature about the Gilroy’s Atlas is that this atlas has some pretty lively pictures that look too real to be fake.

The atlas has a pretty detailed approach and shows each image in an elaborative manner. The images provided in the Gilroy’s Atlas of Anatomy is somewhere between the Netter’s highly colored artificial images and Rohen’s real-life images.

The atlas also features various tables and charts that give you detailed information about the illustrations and explains human anatomy in an effective way.

Grant’s Atlas of Anatomy was written by Anne M. R. Agur and Arthur F. Dailey. The first edition of the book was published in the year 1943. Like any other anatomy atlas, the book has numerous crisp images in detail that show us the anatomy of the human body in an elaborative manner, but the one thing that makes it different from other books is the fact that it stores all the relevant knowledge concerned with human anatomy in the form of text.

The book is really famous among medical students and is highly preferred by professionals. Anatomy Atlases are pretty expensive to afford by purchase or by rest, and Grant’s Atlas of Anatomy is cheaper than other books.

Grant’s Atlas of Anatomy provides the same information at comparatively lower prices and that is why it is also a preferred one among the students.

Thieme’s Atlas of Anatomy is associated with Gilroy’s Atlas of Anatomy. They are considered different edition of the same book and was authored by the same writers, namely, Anne M. Gilroy, Brian R MacPherson, Micheal Schuenka, Erik Schulte, Udo Schumacher.

Thieme’s Atlas of Anatomy is pretty famous among the students pursuing medical sciences. The atlas is more of a textbook than a picturebook. It surely has numerous images of the human body taken from different angles to explain human anatomy, but it also has a lot of text that makes it rather descriptive than being illustrative.

This atlas is for the students who are more interested in reading than just glancing at the pictures.

Gray’s Atlas of Anatomy is authored by multiple writers, namely, Richard L. Drake, A. Wayne Vogl, Adam W.M. Mitchel, Richard M. Tibbitts, and Paul E. Richardson. It is one of the best selling atlases currently that has been selling itself for years. The atlas is rather old in comparison with any other atlas on this list. Also, an interesting fact about this atlas is that it has a TV Show named after it, called Gray’s Anatomy.

The images present in the atlas are pretty detailed, and you will find that it also features some radiological images associated with human anatomy.

You will find some of this has a very descriptive text given to understand the images, while some only have pictures from different angles. Some will have totally bright-colored artificial images, while some have life-like images, you just need to find the one that works for you and facilitates memorizing.

Do let us know in the comment section how you liked this article, we would love to receive your feedback.