10 Best US History Books To Teach You More 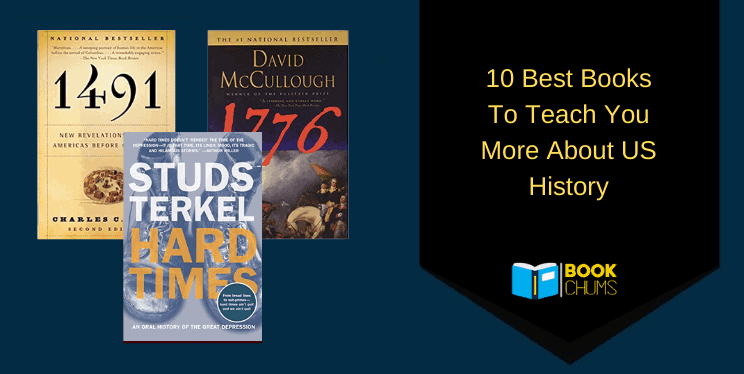 America as a country has always been powerful, even amongst the global superpowers as it is considered the most powerful out of them. Being on the top isn’t easy, especially when all the countries of the world are involved. And I think that any country’s history is a major factor that depicts their economic and social growth.

This means that any reader who tries out a book on US history will greatly be amused and the knowledge provided in it will be extremely useful for personal development. America has a deep history and had to undergo a lot of changes over the years and each of these events made it grow stronger. I think it has come a long way and its history plays a major part in the process.

Even though everyone would acknowledge the US as the most powerful country in the world, a lot of people are unaware of its roots. It isn’t just about the global population, but a lot of local Americans have no idea about their own history. This is why I have prepared this list of books for any reader who wishes to know more about American history.

This book is written by Charles C. Mann.

A lot rides on the first book on any list and if it doesn’t satisfy the reader’s intent then the credibility of the list is definitely damaged. But I can assure you that this particular book will hold up its end of the deal pretty well. This book talks about the United States of America before the arrival of Columbus into their history. The book talks about the condition of America in those times when it was considered more advanced than ever.

This book accommodates science along with history pretty well which is what amuses a lot of its readers. It opposes the fact that the general understanding of life in the US was completely wrong before the introduction of European Explorers. This book is an eye-opening experience in the life of Americans as we assume it to be in those times. It is really interesting to read and provides great insights into the history of a powerful country.

This book is written by David McCullough.

The author is a historian and is known worldwide for his works which is why reading this book would always be a great idea. What’s most important about this book is the fact that it talks about the year that actually united the United States of America. This particular book has accommodated records from both, the British as well as American history which makes it a literary masterpiece.

This book tells the most compelling story of the time when the common Americans walked along with George Washington in a deed to free the country. In July of 1776, 13 American colonies were freed from the rule of Great Britain, and the Declaration of Independence was released. This particular time was crucial to the development of the US into a global superpower, which is why reading it would be really helpful.

This book is written by Studs Terkel.

This book is set in the time of the Great Depression and it is the best book at that for sure. It is another crucial time in the history of the Americans when everything was stripped down to the bare essentials and the book tells the stories of different types of Americans who had to suffer a questionable fate due to it. The author has captured this particular time in an accurate way which is what appeals to the readers.

Those were actually one of the darkest times in American history and it was a time when the international trade completely broke down. This was experienced at different times in different countries but those were the times when people actually suffered a lot throughout the world. This book doesn’t only account for the popular names throughout history but also about the day-to-day Americans who had to travel halfway across the country to look for employment and the people who struggled for even a single time worth of food. The book will give you a look into this painful time in human history concentrating on America as the lead.

This book is written by Loren Schweninger and John Hope Franklin.

This book portrays another important time in American history but that’s going to be true for most books on this list. Anyway, the time before the Civil War was really a time that needed to be noted especially to the field of the plantation. John Hope Franklin is considered one of the foremost African American historian of the country and his analysis of slave struggle and escape.

The book goes on to discuss the abruptions caused in the states due to the false practice of slavery. The historians discuss how the slaves were outraged due to slavery and how white masters of these slaves were hell bitten to continue the practice of it. This is a really great book that emphasizes an important topic with the right light on it. Try checking it out for an informational journey through that time.

#5. The Island at the Center of the World

This book is written by Russell Shorto.

The author has successfully captured the life in the 1600s New Netherlands even though all the records of that period were destroyed. Its capital was New Amsterdam and the author has done a good job in trying to present the effect of the Dutch colony on America. It is the small story of the time that might make you realize that there is still a lot about America that you don’t know yet.

It is said that this colony pre-dated the “initial” thirteen colonies. The capital respected multiple ethnicities and its citizens believed in liberal beliefs like individual rights, religious freedom, and free trade. The book even elaborates on the conflict between the young advocate Adriaen van der Donck and the Dutch colony’s autocratic director, Peter Stuyvesant. This book might provide you a fresh perspective on the history of this powerful country.

This book is written by Richard Kluger.

This book isn’t just great for you to learn more about American history, it might even teach you one or two life lessons that tend to be useful to you later on. It talks about destiny and paints a small yet interesting picture of the American dream. As you can simply understand from the title, the book is based loosely on destiny and it talks about what it meant to the early Americans.

It discusses how people who settled in America initially, used to take the things that didn’t even belong to them to keep themselves going. This means that they believed in taking whatever they can have even if it isn’t theirs rightfully. This is why the name of this book is “Seizing Destiny” and I think it tells us a lot about the initial settlement conditions of early America. Reading this book out might open your perspective up and teach you a little more about the United States.

#7. A Stillness at Appomattox

This book is written by Bruce Catton.

This is obviously one of the best books on this list because of the fact that it is considered the best book about civil war. As we all know, the civil war had a very powerful impact on the current shape of America. The perspective that Catton has provided us via this book is something to be appreciated and the way he has done so is brilliant as well, keeping in mind the reading level.

The thing marked using this book that shocks people the most is the simple facts that need to be known about the Civil war. It is said that about 2 percent of entire America has to lose their lives during this war. Obviously, the amount of suffering caused by the war is something that can’t be compensated. This book tries to make the reader aware of certain information about the war that they might never have heard before.

#8. Empire of the Summer Moon

This book is written by S. C. Gwynne.

It discusses the rule of the Comanche Indians who ruled the Great Plains. There is everything from the basics of the tribe to the way they were intimidating for all the other tribes and warriors. Their skills in fighting and as riders are also something too remarkable to miss. All in all, this book is an entire package to know more about the Wild West in the 19th century.

The book is written by Henry Hampton and Steve Fayer.

Civil rights movement is what supported the flag of America’s freedom from racism. It was a movement led by the African American community to free America from legalized discrimination due to the color of an individual. This particular time of American history is truly empowering and this is the best book about the civil rights movement to gather the information from.

This book was liked so much by the audience that even a companion to this book was released in the form of a PBS TV series know as Eyes on the Prize. This book discusses the very start of the movement and the phases that marked important turning points along with some of the important people who were involved in the movement. Reading this book put is a very great option if you wish to know more about the movement.

This book is written by Frances FitzGerald.

Don’t consider this book the least out of the lot just because it is the last one on the list. It is the best book that you can find anywhere depicting the Vietnam War. The author has put forward a great writing style which will obviously grab the attention of the reader. It isn’t really difficult for anyone to understand the involvement of this war in the current structure of the United States of America.

It is considered a classic book due to the fact that it has survived for more than 4 decades and the fandom is still increasing each day. The way this book tries to pass off valuable information while maintaining an interesting literary style is absolutely admirable. Check this book out to know more about the Vietnam War and the events that transpired during the war.

I hope I was able to present an impressive list of the best books on US History. These are all a part of my personal collection which is why I recommend each of them quite strongly. If the content was helpful, please leave a like on the post or drop a comment below.