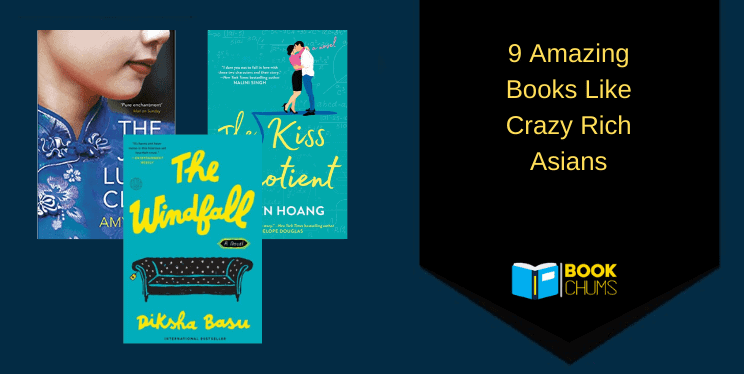 Romantic comedy novels are one of the most interesting entertainment sources for readers nowadays. These books have a nice touch of reality along with a wonderful storyline which is worth checking out. The way these books are presented and the way they make a reader feel is really precious, which is why most readers love the beautifully hilarious genre of romantic comedy.

There are a lot of books that fall under this sub-category and one such book is Crazy Rich Asians. This particular romantic comedy book has gathered a lot of love since it was published. So much so that they even had to make a movie adaptation out of it. The book was really interesting and so was the movie which is why it gained a lot of fame really quickly.

The book is based around the story of an Asian couple and the male protagonist of the movie comes from a rich family but his lover doesn’t know that. When he takes her to a family wedding to introduce her to his family, she finds out how vastly rich her extremely normal boyfriend is. As the book proceeds, the couple has to go through certain issues, especially the girl and the turn of events is quite hilarious as well.

Due to the well-built and interesting storyline, a lot of readers can’t get this book off their minds and I don’t think they should be blamed for that. The book really has a very interesting storyline and reading it out won’t be a bad idea if you haven’t read it. But for those who have already read it and need another book with a somewhat similar storyline that can blow their mind, then here’s a list of some amazing books to help you out.

This book is written by Amy Tan.

This is a beautiful book and it completely deserves its position on this list. It is an absolute classic and over the decades, it has gained a huge following. It was considered so great that they even made a movie adaptation out of it. The author’s literary style is really interesting when you look at this book and as you move forward in the storyline, you’ll feel like she hasn’t compromised on the beauty of the content even a bit.

The book portrays the story of four women from China who meet to discuss stories about each other, play mahjong, and eat dim sum. These women have recently moved to San Francisco and it is quite different for them to lead their lives out here. The best thing I found about this book is how the author can latch the readers in without their own knowledge, just by shaping the stories of these women perfectly within our reality.

This book is written by Helen Hoang.

This is another great book to go through and I think it is very much similar to Crazy Rich Asians. But even though the similarity, the two books are very different. The way the author has put forward a beautiful storyline along with simple concepts to understand. Another great thing about this book is the way it talks about a serious disorder and converts it into a series of hilarious interactions, which can’t be seen everywhere.

The story of this book revolves around a 30 years old woman named Stella Lane who is a mathematician suffering from Asperger’s disorder. Due to this, she has trouble socializing which is why she hasn’t had any luck with relationships even though she had made a lot of money being dedicated to her work. She finally decides to take the help of a hired professional and the way things unravel is just hilarious. Check out this book to find out what Stella does to get over her problem.

This book is written by Diksha Basu.

This is another beautiful book that is pretty similar to Crazy Rich Asians. Although, Crazy Rich Asians was set in China while this book is set in the mysterious subcontinent of India. The storyline it puts forward is absolutely amazing and the characters are obviously well-placed. The language is easily understandable and so is the story behind it all. I personally love this book for the concept it puts forward.

This book revolves around the Jha family where Mr. Jha sells his website for a huge amount of money and now he doesn’t have to stay in their crummy apartment anymore. They move to south Delhi, which is where the richest people live and Mr. Jha becomes obsessed with the Chopras, trying to fit into their rich lifestyle. The whole dynamic of their relationships and their personal life shifts, which is hilarious to witness.

This book is written by Helen Hoang.

This is another book by Hoang on this list and that simply tells you a lot about the wonderful author and her work. She has written a lot of books in the sub-genre of romantic comedy that revolves around Asians and all of these books have been gigantic successes over the years. Her blend of humor with love in a tasteful way is really appreciated by the readers and I think this is one of her greatest books.

It revolves around the story of an accountant named Khai, who likes how things are going for him. Although he is happy from his life, his mother wants to find him a nice bride to live his life with. She goes to Vietnam, which is supposed to be her home country and tries to find a wife for him when she meets the single mother of a 5-years-old, Esme. Khai suffers from autism and doesn’t think he can find love, so the series of events that take place in which Esme tries to win him over is hilarious to read.

This book is written by Fatima Farheen Mirza.

This wonderful book is the debut novel of the author and it works out pretty great. The deep and meaningful storyline of this book is appreciated by most of its readers and I think even though it isn’t that funny, it still has a great message behind it. The way everything proceeds in this book is something worth checking out and the characters described in it share pretty well-defined and deep bonds.

This book revolves around Amar, whose sister Hadia is getting married and she wants her brother to be there. Although Amar does show up at this wedding, he remembers the reason he had to leave this place when he sees her at this wedding, Amira. But don’t think of this book to be so shallow as to talk about nothing but the dating issues of the young generation. The book even goes back to the story of these families and what broke them initially yet later united them. This book will really provide its readers with a fresh perspective.

This book is written by Vanessa Hua.

This book is also a debut novel of its author yet you won’t feel like it is the first book she has ever written. The writing style of this author is really admirable and a lot of people have grown fond of this book just because of her penmanship. This book also revolves around immigration and the story it puts forward is a serious one, yet unlike anything else that you might have read before.

The book revolves around the story of a woman named Scarlett Chen, who gets impregnated by her boss. Her boss wants her to give birth to a boy for him but when a sonogram reveals that she’s about to give birth to a girl, she flees China and goes on to Los Angeles to give birth to her child as a fellow American. This is why she goes to a place for unwed mothers and tries to live her piece of the American dream. This particular book can wake you up into a reality that you haven’t seen before.

This book is written by Jade Chang.

Most other books in this series talk about romance and money as a first-hand topic but this book is different. It rather talks about the time when you lose your money and what it might be like on the other side of the schism. It is a thought-provoking book and the concept it tries to portray is really something I would look forward to reading.

The book revolves around Charles Wang, who has made a lot of money through his cosmetic company. But he loses it all due to recession and comes down to his bare essentials which strip him down to just a single car in his possession. He drives down his two children after picking them up from an educational institution that he can’t afford, to the eldest Wang daughter’s home in upstate New York.

This book is written by Jenny Han.

The title of this book itself is a really catchy one. And a lot of readers might be thinking that this is a sequel to Cecelia Ahern’s P. S. I Love You but it is not. It is actually a really great book by Jenny Han and it has been appreciated by readers all over the world. It might seem like a controversial book, highlighting a controversial topic that might turn out to be thought-provoking.

It revolves around a girl named Lara Jean who unexpectedly falls in love with a guy named Peter. They felt like they were just pretending to be in love but all of a sudden they weren’t. She couldn’t even figure out what was going on when suddenly a boy from her past comes back into her life. And just as he returns, her feelings for him come back to her as well. It is really interesting to read this confusing tale to find out what Lara chooses for herself.

This book is written by Josie Silver.

This book doesn’t really revolve around Asians but it is still a love story that you won’t ever forget. The theme of this book is really amazing and would actively excite any reader who loves such books in the first place. I suggest you read and recommend this book if you are a dedicated reader because it will really be one of the best stories that you read. The book will make you fall in love instantly.

It revolves around the story of Laurie, who believes that love, at first sight, is a lie that is just made to fool people who watch crummy, romantic movies. But this belief turns to ashes when she sees a strange through her bus window on a December day. Their eyes meet and she feels it in her heart that this is the guy she is destined to be with, but her bus drives away. The book interestingly shows whether they will meet or not which will be an experience of a lifetime.

I hope this awesome list of books was appealing to you and the books were able to tickle your fancy. Some of these books are not suitable for very young readers due to certain euphemisms used in them but they might still be somewhat amusing. If the content was helpful, please leave a like on the post or drop a comment below.