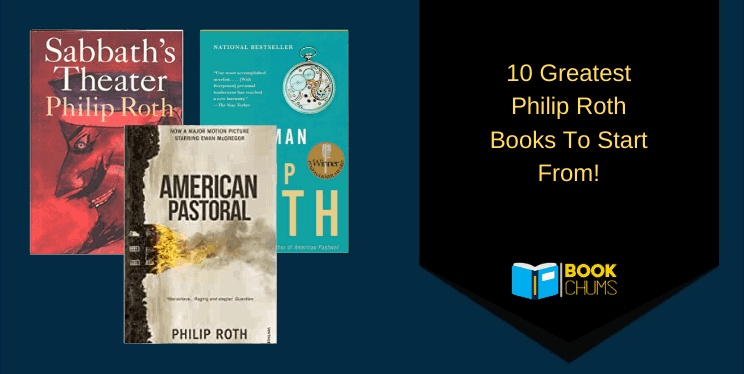 Philip Roth died two years ago and that was the day that the field of literature got a great hit. His literary works were a great deal to his fans and over the years, his work was being appreciated a lot. There isn’t a doubt that Roth was a treasure to the field of literature but to humanity as well, due to the fact that he inspired a lot of authors on his way to get up and get going. A lot of Roth’s books were even cinematized due to his marvelous storylines.

When he died, a lot of his fans felt like they lost a part of themselves. Even I felt restless for days when I found out this tragic news. His books have been around for so long and due to the quality of content he chose, they will never stay with us for a very long time. A lot of Roth’s fans were debating over his best books so here I am, as a tribute to Philip Roth, I have assembled this list of books that are the best works of the author.

The author has been one of the best ones around for a long time and his work lives on even after his death, and this particular book is considered to be the best over time. He has showered it with his incomparable writing talents and it is quite easy to deduct that he has done a lot for humankind by giving us his books. These books have one him a number of awards and we all know that the man really deserves each honor he has received.

The protagonist in this book is obsessed with death and the way Roth portrays him is just marvelous. The guy keeps reminding himself that he doesn’t have to think about oblivion until he is 75 at least but he just can’t stop himself. He already has three failed marriages and has fathered three children, out of which the daughter completely adores him while his two sons detest him. He falls ill a lot which is why he is quite jealous of his brother who is quite fit. Check this book for a fun time that helps you enjoy the beauty of life while you still can.

Now, this is a novel that would enthrall you to an unexpected extent. The characters of this book are well thought and the storyline is pretty unique. The way things turn out is one thing that you would never see in any other book as it is obviously written by one of the best American authors to have ever walked this planet. The colossal hero of this book goes by the name Mickey Sabbath and he has a pretty great lifestyle.

He is sixty-four years old and but is still exceedingly libidinous and defiantly aggressive. One thing that he needs every day is sex and it is not just an obsession, but a rule that cannot be changed in his life. But after his mistress of long dies, he is driven to the verge of madness while thinking about his past life and the ghosts of the people who hated and loved him along the way. This book is obviously a great option if you need something entertaining to experience.

This book is set up in the time of post-war America and it puts forward a pretty interesting storyline. The book revolves around a legendary high school athlete named Seymour Levov who is a family man and a hard-working individual. Apart from that, he is an inheritor of the Newark glove factory owned by his father. He was nicknamed Swede and his personality was loved by almost everyone who came across him.

But his great American luck comes to an end one day in the tough year of 1968. Things turn around for him and everything that had been going smoothly for him earlier turned pretty problematic now. The loving and quick-witted daughter of Swede, named Merry, has grown up into a sullen, fanatical teenager. The book puts forward a lot of human emotions that occur to our well-placed characters and hence is a must-read.

This is another great masterpiece of a book written by Roth. Another book with a unique storyline and well-defined characters which are quite captivating to understand. It is set in the year of 1998 when America was modernizing and a lot of the old beliefs were being removed from society. The president was powerful and he pushed the country hard into a frenzy of prurience.

The book revolves around a professor named Coleman Silk who used to teach classics and was an aging individual in a small town of New England. He is made to retire as he was accused of being a racist and that is obviously a false accusation but what can he do against it. Coleman has a secret that he has hidden from everyone around him but his writer friend Nathan Zuckerman stumbles upon it. Read this book to know the mysterious secrets Coleman has surrounded himself by.

A lot of Roth’s books used to have a pretty strong sexual aspect and though it isn’t liked by some readers, it still doesn’t offend most. No matter what Roth writes, it is always amusing to read and so is this masterpiece by him. This book revolves around the story of the great and famous Alexander Portnoy and his confession. It is a gripping book and you will like it from cover to cover.

Portnoy rushes through life with his uncompromising sexuality yet he was barred by his unpleasant childhood through the course of his life. Portnoy suffers from a disorder that turns a person looking for sex in a perverse nature and his morality is compromised in the process. It is a disorder where the patient might like the acts of voyeurism, exhibitionism, oral-coitus, and fetishism without their morality speaking in between. Read this book to know more about Portnoy’s confession and what all he has to go through because of this.

I think Roth was pretty caught up in books that concluded with confessions in his mid-career during the ‘90s. He wrote a very powerful story in this book that will positively excite the reader and would tickle their curiosity. This book puts forward a somewhat spy story with a very awesome plot setup. The book really is one of a kind as it talks about the serious issue of identity theft and the way Roth has talked about it is awesome.

Roth has introduced this serious topic in a way that seems exciting, passionate, and hilarious at the same time which is why it has gained a steady fan following. The book presents the story of a guy who impersonates Roth as a writer and has a secret objective to drive the Jews back from Israel to Europe. The author puts forward certain situations in this book that might give you a certain kick, so reading it won’t actually be a disappointment.

This is somewhat a love story and a collection of a few short stories which make it quite different from the rest of books written by Roth. It revolves around Neil Klugman who is from the poor Newark and Brenda Patinkin who is from the suburban short hills. The way Roth describes these two characters in his book is really admirable and it makes you fall instantly in love with these awesome characters.

The description actually seems like all the conventional love stories out there where the protagonists are from different backgrounds but there is a sharp difference in this tale. The two characters meet one summer and there starts a love affair between the two individuals who are from very different parts of the society. The exploration of Roth into both of these societies is marvelous and fun to read. Check this book out to experience a spellbound state into the love affair of these distinct individuals.

#8. The Plot against America

In this well thought out book by Roth, he puts forward an alternate version of American history which would excite you to your core. The tiniest details are so well placed that they make you fall in love with this book. This book revolves around the story of Charles A. Lindbergh who is a rabid isolationist and a heroic aviator and he is elected as the president of America in the year 1940, which is the time this book is set in.

After becoming the president, he negotiates with the great dictator Adolf Hitler to make a certain understanding while the new government was trying to form an anti-Semitist program. As a boy being brought up in Newark, he wanted to protect his side of America which always seemed safe but was now under a great threat. Check out this book to see the kind of efforts he is willing to make for saving his side of the country.

This book is from Roth’s series that revolved around a writer named Nathan Zuckerman. The series was pretty great and each of its books was appreciated just like this one. The way he talks about the most serious topics is actually enlightening yet he carries forward an interesting approach making the reader like his insights on every topic he picks up. The storyline of this book is pretty captivating and the density of each character description increases as the book moves forward.

The protagonist of this book, Nathan Zuckerman who is a young writer, wishes to meet his idol who is a secluded master of American literature. The name of this idol is E. I. Lonoff and Zuckerman makes a trip to go and meet him. He soon feels himself trapped in the life of Lonoff with all of its aspects, whether you talk about his drive of artistic truth, the complexity of artifice. The book will take you through a once in a lifetime journey that will help you know much more about this genius and his life while providing a certain unexpected twist.

This is another well-spun tale by Philip Roth and I must admit that the title of this book itself is pretty interesting. Though it is the last book of this list that doesn’t mean that it should be underestimated even a little. The storyline presented in this book is of a completely unique style and would actually be fascinating to any reader at all. The way the storyline proceeds is also different from most books you may see anywhere.

The betrayal, cruelty, and revenge put forward in this book will leave an everlasting impact on you. This story revolves around a guy named Ira Ringold who is a big American hooligan, came from the background of a ditch-digger in Newark. He soon becomes a huge radio star and then destroyed as a man as well as an entertainer. He marries a silent film-star Eve Frame and then things do down the track for him. Check this book out to know more about what happens and how Ira deals with the trauma.

I hope this list of books that were written by Philip Roth was satisfactory to you as a reader because these are a part of my personal favorites. Most people will agree to the order of this list and as a Roth fan, I actually love these books in this order itself. If the content was helpful, please leave a like on our post or drop a comment below.